Dynamic Containment is a service provided primarily by grid-scale batteries to the National Grid, and is a key mechanism towards operating a net zero Transmission System by 2025. The DC service will help to eliminate the need to rely upon larger carbon-emitting generators, such as gas or coal-fired power stations and supports the ability for the UK to build large quantity of renewable generation, such as wind and solar.

The demanding technical parameters require service providers to react sub-second to changes in the system frequency of the GB transmission system. Meeting this requirement whilst still accommodating the high degree of required output stability has involved pushing the boundaries of what grid-scale battery sites are capable.

Noriker Power was one of only two developers to deliver capacity at DC inception of service, reaffirming the benefits of its unique high-performance in-house technical services, including the Noricore® control system.

Marc Thomas, MD of Noriker Power, commented: "It is a real credit to the commissioning and control system teams that we delivered our Thurcroft site into a brand new service just three weeks after energisation. Dynamic Containment is the most technically demanding service we have seen so far, and is a great showcase for what batteries are capable of doing to facilitate the energy transition."

Powering into a New Decade

Noriker Power ended the decade by building our largest project to date, a 49MW pure battery storage site at Red Scar in Preston. Since the start of construction in August 2019 the Noriker team have been working full pace to deliver both this project, and upgrades to four of our original FFR sites, to enable them to take full advantage of opportunities in flexibility and battery optimisation markets. On the 31st December we celebrated the sale of the 49MW Red Scar asset to Gresham House Energy Storage Fund Plc (GRID) for £32.8 million.

Our lean yet highly-skilled and diverse team cover the full stack of project development, with a particular focus on design engineering, project management and software development. Noriker jointly developed Red Scar with Gresham House, from managing the grid connection and planning, through to an unprecedented rapid commissioning programme, utilising our in-house developed Noricore® control software. Noricore® offers deep embedded control, to deliver reliable automatic and remote plant operation. The asset is now ready to be optimised within a multitude of energy markets and offer key balancing services to National Grid as well as future services to the local distribution network. Projects such as this are fundamental in supporting the transition to a renewable grid; crucial for reaching the UK's net zero carbon goals.

Red Scar brings the total Noriker portfolio up to 124MW/145MWh in less than three years, which includes 114MWh of installed capacity in 2019 alone. We are in-build on a further 100MW of projects as the current stage of a growing pipeline to be delivered in this and subsequent years, with our next 50MW project due to be energised in March.

With 75MW of operational assets now commissioned, Noriker Power is embarking on a much larger phase of growth, following new investment from our partners at Gresham House New Energy.

The first of three new 50MW utility-scale sites is now under construction in Lancashire. With two further sites commencing in the months ahead, located in Suffolk and Yorkshire, Noriker Power's total portfolio of battery storage assets will triple by the Spring of 2020. This rapidly emerging next-generation class of energy assets is vital to the UK's increasingly electrified future, providing resilience and flexibility to grid operations.

The new sites will benefit from the latest iteration of Noriker's proven Noricore® control technology, which enables the assets to be dynamically scheduled to perform a wide range of response functions at different times of day. An all-new cloud-based data architecture has also been launched this year, into which performance data from these new sites will flow, enabling a range of near real-time analysis and reporting to be carried out. 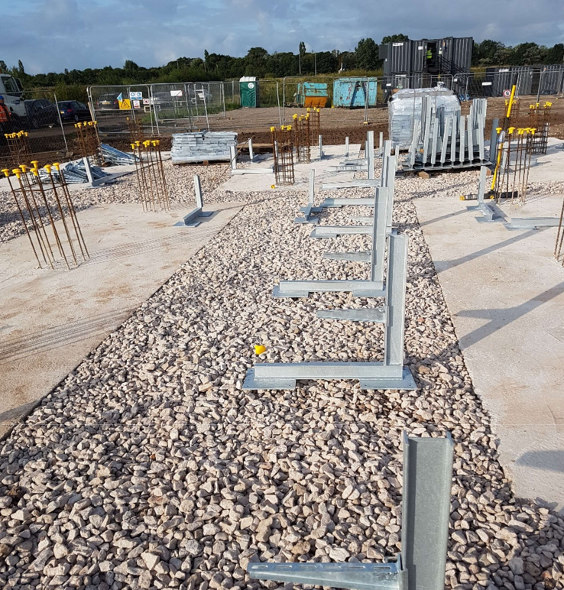 Noriker Power is pleased to announce the launch of the Gresham House Energy Storage Fund plc (LSE: GRID), following a successful funding round by our partners at Gresham House New Energy.

This funding vehicle will unlock the next stage in our growth, with a portfolio of new hybrid energy storage projects now proceeding to full build-out during 2019. These new projects will benefit from multiple revenue streams, and offer the flexibility to evolve their operating profiles as the market develops.

Full details of the new fund are available in the London Stock Exchange announcement.

We are thrilled to have won an award at the Electrical Review Excellence Awards 2018, held at The Dorchester, London. The Awards recognise projects that embrace the latest in electrical engineering, display forward-thinking design and implementation, and champion the highest environmental, safety and energy efficiency standards. Noriker was recognised in the 'Power' category, sponsored by Omicron. 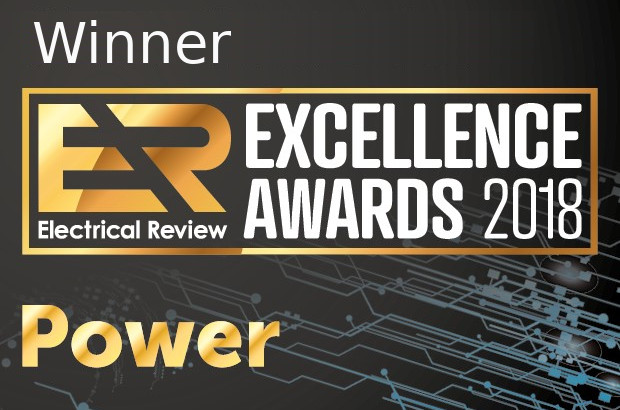 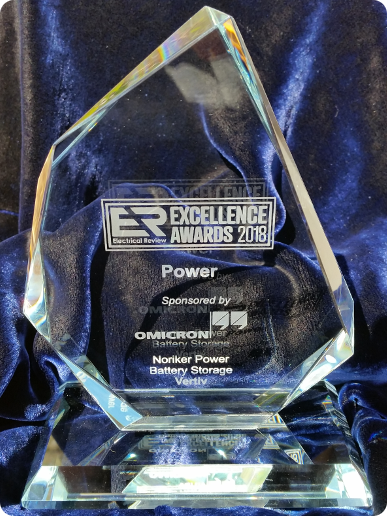 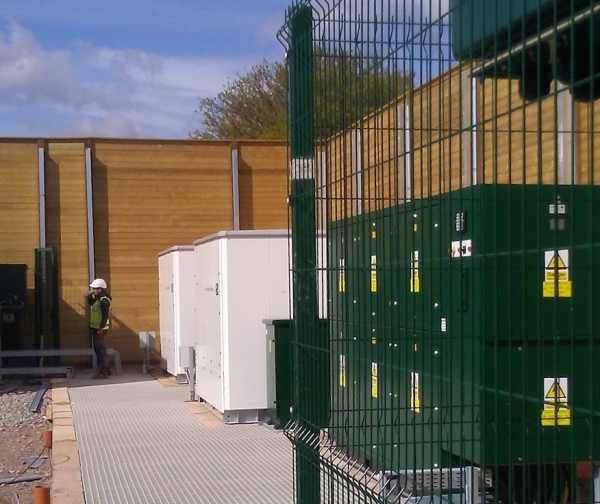 Noriker Power is pleased to announce the successful completion of its Roundponds site, a 10MW import/ 20MW export hybrid storage facility in Melksham, UK. Roundponds started delivering Firm Frequency Response (FFR) on 1st May 2018. This is the third of Noriker Power's FFR contracts with National Grid, and the fifth site that Noriker Power has commissioned.

Fully controlled by the cutting-edge Noricore® software, this hybrid battery / engine project provides frequency response services to the UK's National Grid. The projects are a major component of the future control infrastructure of the grid, and are being built to address problems brought about by the decommissioning of old power stations, the decarbonisation of electricity production and the transition to renewable energy. The sites provide lower cost and high reliability services, in support of a renewable grid.

Completed in under three months from breaking ground, Roundponds is the last site in the first phase of a hybrid and battery storage program, delivered by Noriker and its funding partner Gresham House New Energy, providing storage based high flexibility infrastructure for a renewable-rich grid. It enters service on the anniversary of Noriker's first project, Staunch, and brings the portfolio total to 70MW.

Noriker Systems has introduced a major update to its system control software. The new Noricore® version enhances inter-controller communication to support wide area aggregation, optimises the FFR (Firm Frequency Response) control algorithm, and provides stronger support for the web-based operations and monitoring functions. The new update has been successfully rolled out onto all their projects including the original Noriker Staunch, Project Alpha comprising sites at Lockleaze, Rufford and Littlebrook and the new Roundponds site, delivering a portfolio total of 70MW of FFR contracts for National Grid.

The new Noricore® software significantly strengthens the capabilities of the projects, with not just an improved user experience, but a strong focus on reliability for this critical infrastructure service. Noricore® has been designed to adjust to the fast changing structure of the UK power industry, and allow rapid reconfiguration of installed sites to perform multiple stacked or individual services, whether for FFR, EFR, peaking, energy management or other future services. It empowers the power plant to be come responsive, dynamic and adaptive, reducing the risk that the plant built today will become the wrong design for the future.

Dr Marc Thomas commented: "This is a critical, structural upgrade which future-proofs the software that runs our sites, and therefore our projects. It demonstrates our commitment to the pursuit of excellence in our products and services." 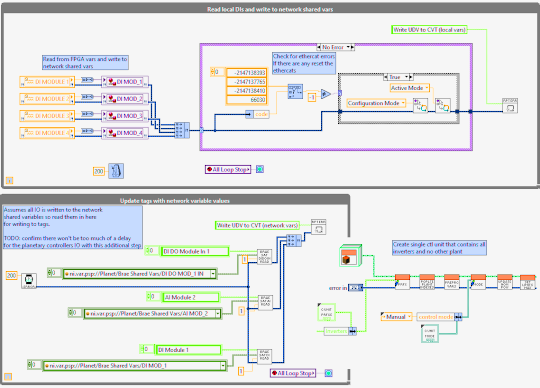 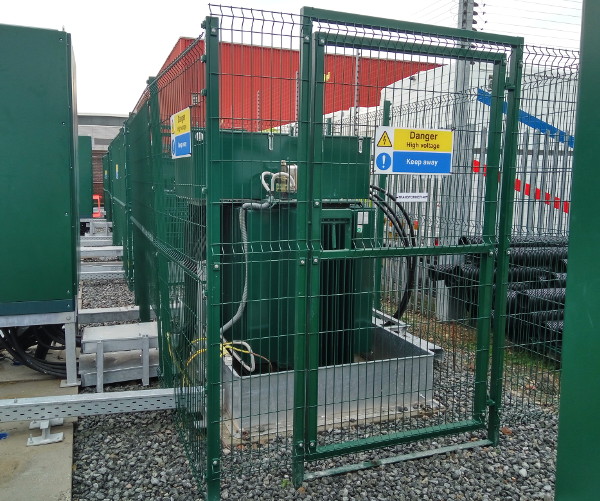 With the successful commissioning by Noriker Power of its 8MW battery Littlebrook site in Dartford, at the beginning of December, the Noriker Alpha project is now operating at full capacity. Noriker Alpha is a single Firm Frequency Response (FFR) contract, delivered from three separate sites. The project is fully symmetric, capable of both importing and exporting a total of 30MW.

The sites operate on the Noricore® control system software, which links to Noriker Power's operations and maintenance platform being developed by the Noriker in-house team. This brings the portfolio total to 50MW of operational FFR assets.

Dr Marc Thomas, MD of Noriker Power, commented: "We continue to forge ahead with our projects, and are looking forward to the opportunities that the new relationship with Gresham House will bring to our future development in this fast evolving sector."

Noriker Power is pleased to announce it has successfully commissioned the second and third of its sites providing dynamic Firm Frequency Response (FFR) to National Grid. The Rufford 7MW hybrid site near Mansfield, and Lockleaze 15MW battery site in Bristol, were funded by Hazel Capital, and use batteries from LG Chem. These first two out of three sites that form the Noriker Alpha project, an aggregated portfolio benefiting from the Noricore® control system software, and the second of Noriker's FFR contracts with National Grid, entered service in September 2017.

Following the successful Noriker Staunch project (below), Noriker Power once again demonstrated its ability to deliver these challenging projects. Noriker will continue operate the portfolio from its Cheltenham headquarters.

Dr Marc Thomas, MD of Noriker Power commented: "We are delighted to be delivering this vital service to National Grid from these latest sites, and with the close working relationship with our funder Hazel Capital." 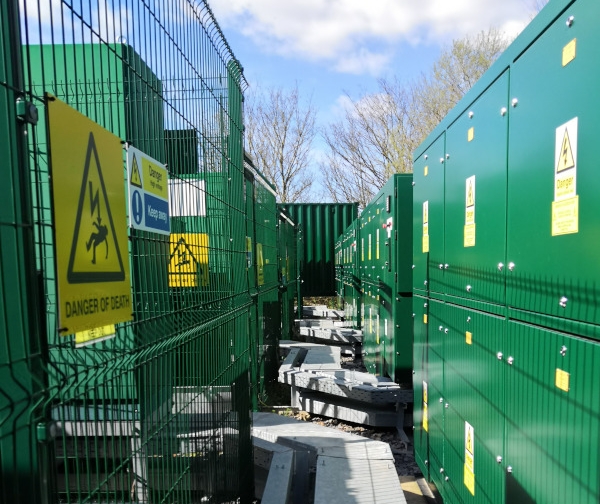 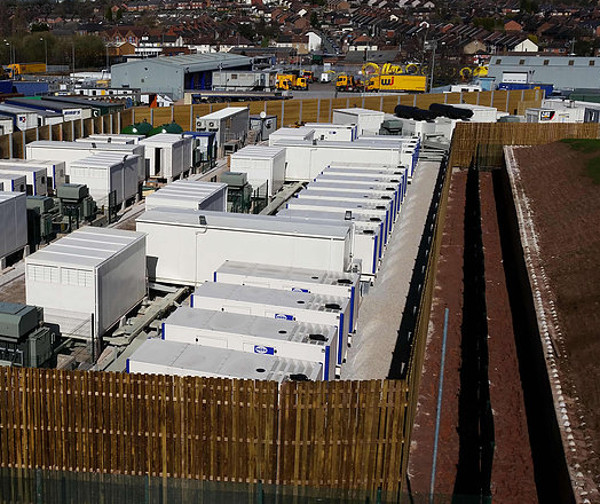 Noriker Power commissioned the UK's first fully commercial large scale battery project dedicated to frequency control at the end of March 2017, which then entered operation on 1st May 2017. A 20MW hybrid power system combining 20MW of batteries with 20MW of diesel and gas generators began providing balancing services to the National Grid on their FFR (Firm Frequency Response) programme. The project, located in Newcastle-under-Lyme, was funded by Hazel Capital.

Noriker Power pioneered the use of grid scale battery systems to deliver National Grid's dynamic FFR service, winning its first such contract in February 2016. Noriker developed the project from its inception through to final commissioning, taking the lead on engineering and project management, successfully achieving the contract start date.

Controlled by a cutting-edge SCADA system, specially developed for the project, this hybrid battery / engine project is a significant breakthrough in frequency response service provision within the UK. Previously, dynamic FFR had been delivered by large transmission connected providers, who provided FFR by stacking the service onto energy export. These providers needed to be exporting at least 50% of their rated capacity before then providing frequency services. While historically this was never a problem, with the huge growth in renewables these traditional providers are increasingly not required at times of peak renewables output, and would not be available for FFR. To ensure grid stability, renewables were facing curtailment, and barriers to continued growth.

By providing dynamic FFR from zero output, Noriker's battery hybrid system avoids renewables curtailment, and is therefore an essential component in controlling a renewable grid. This type of plant addresses problems brought about by the decommissioning of old power stations, the decarbonisation of electricity production and the transition to renewable energy, and it does this at lower cost to the consumer than the traditional service providers.

Completed in just four months from deployment to site, the Noriker Staunch project becomes the first stand-alone battery storage facility, based on purely commercial funding backed by an open tender contract with National Grid, to provide frequency services in the UK. This important achievement has placed the Noriker Power at the innovation forefront of the UK power industry.

Dr Marc Thomas commented: "This is a monumental milestone for Noriker Power and proved the capabilities Noriker Power proudly possesses. We thank Hazel Capital, our trusted funding partner, for the unreserved support they have demonstrated throughout the project."